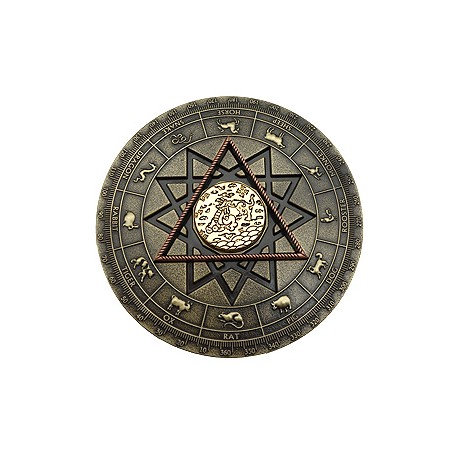 €38.68
Tax included
Forging solid new alliances is undoubtedly the first step to success in career and business. The Horoscope Code is the key to unlocking all the secret formulas of chinese horoscope. Breaking this code will be essential in neutralizing the astrological enemies. Forging alliances tend to dissolve the negativities of discord in astrology signs, element or troublemakers. This code has a series of combinations where theories of "San He" (Three Combinations) and "Liu He" (Six Combinations) can be applied universally to all the 12 horoscopes. It comprises 3 multicolored components: a San He Triangle; a thick Pi Yao coin and a 360-degree Bagua Horoscope solid core. The San-He Triangle is used to form unity with your horoscope allies, whereby there are a total of four combinations of allies according to the theory of "San He". The Pi Yao coin has a hidden 5 Element Cycle in "productive mode" underneath. Besides bringing in helpful resources to lessen obstacles and increase success, this coin also balances ones personal elements when yours go out of sync. It is a remedy for astrological and bazi element conflicts and imbalances. Next, the base core has an outer ring that exhibits to a high precision the degrees that correlate to the 12 earthly branches and 8 trigrams of the bagua. The 12 earthly branches protect all 12 horoscopes against all odds, mishaps, misfortune, accidents, sickness, devastation from unlucky stars and annual afflictions. There are 4 triangular ducts that allow the San-He Triangle to be placed on any of them to form 4 possible combination of horoscope allies. Last but not least, hidden underneath the base core are 6 pairs of horoscope secret friends. According to theory of "Liu He", they are unexposed soul mates who will appear to you only in times of need.
It is important to note that every zodiac has their own personal secret friend and allies. These secret friend and allies have special affinity to them and will help them achieve their endeavours. They will ease your year ahead, remove all obstacles, improve networking and reap the most benefit out of the year for maximum luck. This Horoscope Code is therefore best applied for:
1. Those zodiacs that will be experiencing a good year, your secret friend and allies will help you make the most out of it to achieve maximum results
2. Those zodiacs that will be experiencing a bad year, your secret friend and allies will help you through the challenges, protect against harm and provide great strength for persistency.
3. Those who are seeking for smooth relationships, good social life, activate their networking and business luck.

In short, the Horoscope Code will help you alleviate the shortage of helpful people when displayed at your own sign's direction. It gathers more support to your side by forging new solid new alliances against the enemies. This is therefore the most promising method to counter against troublemakers, petty characters and manipulative people.
More about Zodiac Allies and Secret Friend

In the practice of Feng Shui, there are many formulas such as Bagua 8 Aspirations Theory, 8 Mansions and Flying Stars that could help us increase our luck in health, wealth and relationships. However, very often these formulas have to be practiced together with the ancient formula for Chinese Astrology/Zodiac to bring the best out of Feng Shui practice. Chinese zodiacs (horoscope) are based on the lunar calendar and goes in a 12-years cycle giving 12 animals sign altogether according to one's year of birth. Each zodiac is assigned to one compass direction in a wheel known as the Astrology Wheel. It is this personal compass direction that would benefit one's personal luck in countering obstacles and becoming a winner. When one's personal chi essence in their living space is activated, it will bring the most out of them.