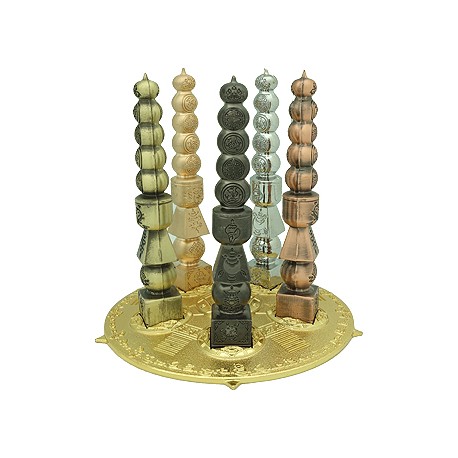 €61.82
Tax included
More potent than the ordinary, this powerful cure against the Five Yellow comprises of five multicolored "Cosmic Pagodas" on the "5 Element Plate". The Cosmic Pagoda is the more superior heavenly version of the "Five Element Pagoda" held by Cosmic Protector Vaisravana (Heavenly King of the North). This premier version of the "Five Element Pagoda" comes complete in nine tiers instead of only five. This powerful cure sought the assistance of "Cosmic Energies" to pulverize negative forces of the Five Yellow and clear blocked pathways paving you to a smoother and less aggravating year. Having great control over the cosmic elements, these pagodas wield their miraculous power, guard against loss of wealth, loss of career, loss of life and loss of health. Incredibly powerful, they ward off the terrible potential of fatality and bankruptcy. Each of the Cosmic Pagoda comes in different colors of 5 basic metals, namely gold, silver, iron, bronze and copper which represents the 5 cosmic planets Mercury, Venus, Mars, Jupiter, Saturn. Featured on the pagodas are 8 Auspicious Objects, 4 Celestial Guardians, Longevity Symbol and Lotus of Purity. On the other hand, the 5 Element Plate features the "productive cycle" of 5 Elements, 5 Chien Hexagrams (Big Metal) and is consecrated with mantra of White Umbrella Goddess. It is this "productive mode" of 5 Elements that hold the key to effectively balance weak or missing elements of a space when it goes out of sync, and thus remedying elemental conflicts and imbalances.
The salient features and the importance of the auspicious symbols can be explained and elaborated as follows:
1.The 8 Auspicious Objects are an ultimate cure that serves to generate good energy, subdues bad energy and nourishes the "chi" of a space so that good fortune continues to grow esponentially. It is also a potent cure for extremely bad situation where other feng shui cures are considered not strong enough to counter a problem. Therefore in situations where the #5 Yellow becomes stronger than usual, this is the secret weapon that will subdue it powerfully.
2. The 4 Celestial Guardians provide directional guardiance to evil energies coming from the four cardinal directions. They are the green dragon, white tiger, black tortoise and red phoenix. Known as the protectors of four directions, they provide safety blessings and prevent dangers from hurting the household.
3. The "Sau" Longevity Symbol is a potent symbol that magnifies longevity, creates excellent health and ensures that a long life is uninterupted by sudden unfortunate death.
4. The Purifying Lotus provides remedy for all troubles, mishaps, disputes and disharmony. Useful as remedy when the number 5 or number 2 meets with other inauspicious numbers that give wrathful combinations.
5. The Chien Hexagrams with six solid yang lines represents BIG METAL, thus exerting powerful energies to subdue earth energies from 5-Yellow or 2-Illness stars.
6. The Mantra of White Umbrella Goddess - The powerful Buddha of Protection who carries a white umbrella has the power to symbolically dispel any evil intentions of people who may want to hurt you. Be mindful that everyone is vulnerable to jealous intentions of unscrupulous people, enemies or competitors, so it is better safe than to be sorry. This mantra can also ward off black spells casted by the underlying currents of jealousy and making them harmless. The mantra is "Tadyatha Om Anale Anale, Khasame Khasame Bhaire Bhaire, Sume Sume Sarva Buddha, Adhishthana Adhishtite Svaha" which can be recited 108 times a day. This is the most powerful mantra to diminish the strong evil 5 Yellow.
Instructions
Made from noble materials, this luxurious cure can effectively counter strong earth energy from Fatal #5 Yellow Star and Illness #2 Black Star. They can either be in the form of "natal" chart's Water Star or Mountain Star or "annual" chart's Annual stars. However, please avoid placing them on the floor or inside the toilet since they invite divine help to vanish bad energies, illnesses, evil and killing forces. They can be displayed anywhere else, as long as they are above the floor level on a proper table, platform or cabinet in sectors that are afflicted with #5 or #2. The different colored pagodas can be arranged in a random manner following any arrangement you wish. The individual pagodas will not be glued into the square holes of the base to preserve the 5 Elements on the base. Sticky tack will be provided to hold the pagodas firmly.
SL16018