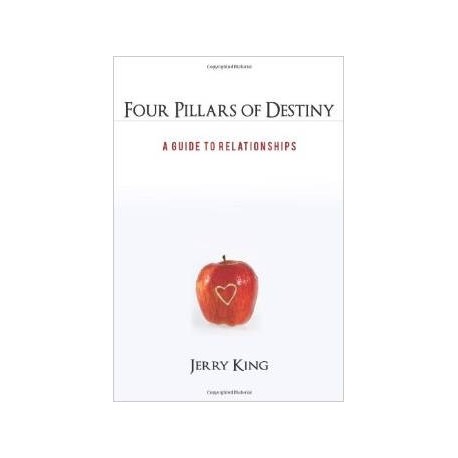 Four Pillars of Destiny: A Guide to Relationships by Jerry King

What makes a relationship lasting? Why do we attract the same types of people over and over again? Why is it so easy for certain people to find love, and so difficult for others?Four Pillars of Destiny: A Guide to Relationships will enlighten your understanding of the age-old questions surrounding relationships, attractions and love. Based on the year, month, day and hour of your birth, you will learn to use the ancient Chinese method of Four Pillars to systematically map out the blueprint of your life in matters of health, wealth, career, love and happiness.For countless generations, the Chinese have been drawn to the Four Pillars system for its accurate method of divination. This system has allowed practitioners the ability to analyze many aspects of a person's life and enlightened the path to capitalizing their cosmic flow when good luck happens. The destiny blueprint each of us receives at birth can be used to reveal options and path that we can act upon during good and bad times in life. Using this blueprint, we can evaluate where our limits lie and understand what we truly are capable of achieving, as well as the type of connections that we can make with those around us.The inaugural book of its nature in English, this is a manual that details 5 element theory, cosmic flow, combinations, 10 Gods and special stars in the context of romantic relationships. Grounded in real-life case studies, the ins and outs of relationships are explained: when they work, why they don’t, how energy factors into attraction, and the basis of successful relationships. You will learn to see the crucial role that energy and flow play in creating opportunities for marriages, affairs and divorces.Birth charts of individuals from all walks of life and locales are explored, including those in the public eye – business innovators, celebrity artists, and political leaders – with verifiable life stories.