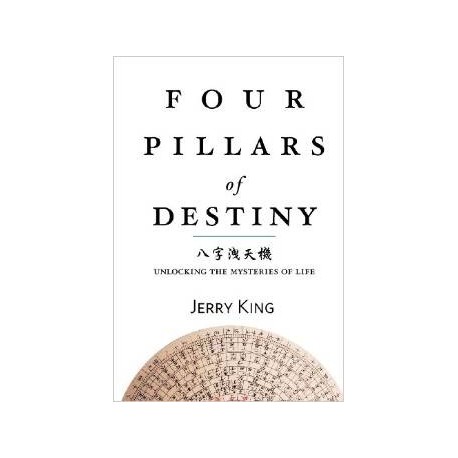 Four Pillars of Destiny: Unlocking the Mysteries of Life by Jerry King

Four Pillars of Destiny: Unlocking the Mysteries of Life is an assemblage of real life case studies and interviews with people from all walks of life conducted by Jerry King. Jerry will also take you through his journey spanning more than 40 countries with stories about other metaphysical practices in Asia and his personal recollections of people that he has encountered throughout his travels. Collectively, he offers solutions for how to live in harmony, with yourself and other people around you.This insightful and original book focuses on the understanding and use of the Chinese astrological system, Four Pillars of Destiny. He will offer details on remedies and solutions for those who may encounter problems in the foreseeable future. In contrast to many traditional Chinese astrology books, Jerry uses real life examples unearthing the age old question of destiny. This book is especially pertinent for those whose interest in astrology is based on recognition of its spiritual significance and its value for enhancing self-knowledge.Are we destined to meet with certain people during our lifespan on this planet? Relationships often come and go. As the energy changes, so does our mentality and personality. The people we meet, and the experiences we go through influence our behaviour. By capitalizing on our strengths, we would stand to benefit much greater from the potential that we were handed with at birth. This book takes Four Pillars analysis to a different level where the Chinese Classics will be used to explain special structures and theories.