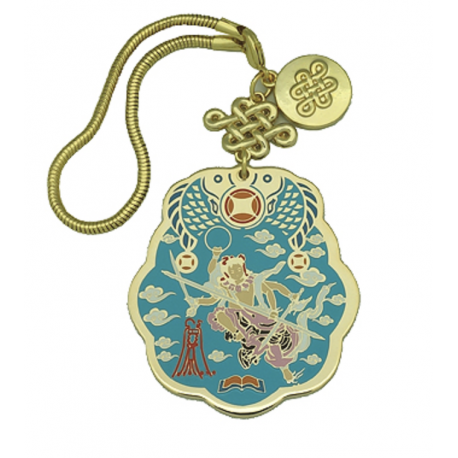 Featuring Na Cha Kid Warrior Deity, this amulet safeguards your kids. Na Cha being the third prince of Lei Cheng (deity holding a pagoda) was born with special powerful fighting skills at a tender age and was made a warrior at the age of 7. His strong presence among the chinese community is due to his popular epic. His most popular weapon is his magic rings he used to fly on sky and fight his opponents away. He always take the lead on any war against evil, with his entourage sent down by heaven. His presence will scare off all evill spirits on earth. In taoist feng shui practice, Na Cha is normally invited into homes to usher in happiness, increase descendants luck, protect kids from sickness/danger, prevent child bully and groom children with obedience. When the kids are spiritually guided and taken care of by this guardian angel, they will give less problems to the parents. Featured behind the amulet, the 7-tier Wenchang Pagoda is an ancient symbol of intelligence, wisdom and mental development. Also featured is a Chilin of Excellence. It is an emblem of success in imperial examination and success in becoming a court official. It also symbolizes descendant's luck and benefits those who are seeking to conceive a baby boy.