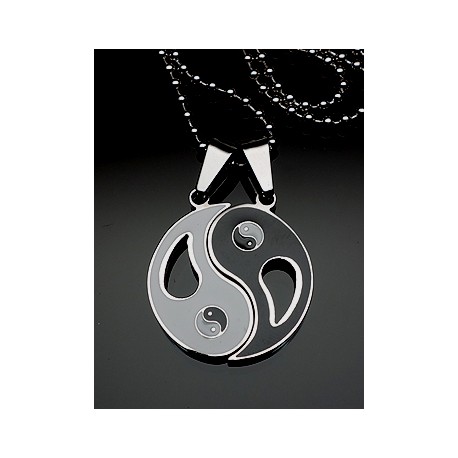 The symbol of "Tai Chi' signifies the balance of yin and yang, which balances forces that are out of sync or facing imbalances. Ancient masters believed that there should be balance in "positive and negative" for everything to function properly. Yin energy brings bad news related to death, injury and illness. The "Tai Chi" is no doubt the best symbol used to ward off negative vibes from too much "yin" energy by symbolically forcing the illumination of "yang" energy. Designed in split pieces, this stunning pendant has two mini "Tai Chi" symbols embedded within a bigger one. Inscribed behind each piece are two most potent Taoist Incantations, "Removal of Mishaps, Accidents, Disasters, Negativities" and "Anti-Evil Spell of Zhang Daoling, the Patriarch of Celestial Masters". This pendant illuminates your aura, overcomes dark forces, dissolves all obstacles and blockages along your path. It protects against all kinds of misfortune, including falling prey to spirit harms. It keeps negative energies away, uncovers and protects against evil attempts, prevents bad intentions and arrests bad luck. It is highly recommended for those vulnerable to falling prey to dirty energy or possible negative spirits and influences from haunted places such as old mansions, hotels, yin places, forests or graveyards. It will protect you, and especially kids or elderly people from succumbing to illnesses or harm caused by dirty energy of such places. Chinese people are often armed with this incantation given to them by high Taoist Masters whenever they travel far away from the hometown because this "caution-to-safety charm" will provide protection against numerous obstacles, yin energies, ghostly attempts, illnesses caused by black magic, mysterious sickness due to dirty energy and violence encounters. For late night owls, this can also be a perfect night spot protector. For those who are weak in life force or spirit essence, it also provides powerful protection when visiting the sick in the hospital, attending a funeral and chilling out at night time entertainment places.
SS16038