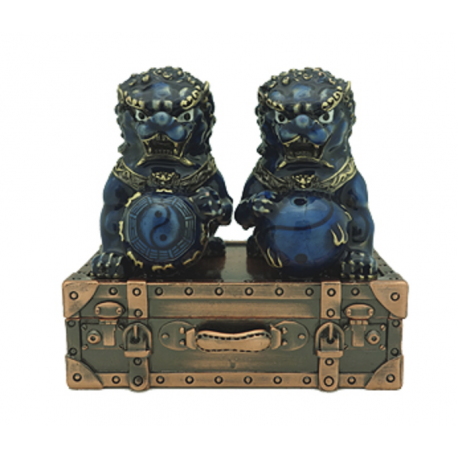 In times of recession, more powerful cure is needed against the Violent Star #7 due to higher crime rates across the globe. Featuring the Fulin Dog's face, it is associated with military strength and hunting prowess, a powerful symbol of enforcement. It denotes protection for all the nine directions including the center. The fulin dog which is considered to be a spiritually endowed creature can provide more power in countering the evil energies from the hidden realm of Violent Star #7. This is necessary when the #7 becomes too powerful. Having the fulin will allow you to ride through the year smoothly with less problems associated to burglary and theft. Admired for its stunning beauty, this remedy features two fu lins protecting a vintage style treasure suitcase, symbolizing your "wealth is safe". It serves as a powerful security measure as well as a wealth enhancer. Security is the degree of protection against danger, damage, loss, and crime. In the modern era, when we talk about security it is not only security of money. But security involves physical security, information security, home security, career security, business security, internet security and wealth security. In the flying star system, the star that threatens security is the Violent Star #7. When the magnitude of influence from Violent Star #7 becomes overly amplified, you need a substantial amount of power to counter such undesirable energy.