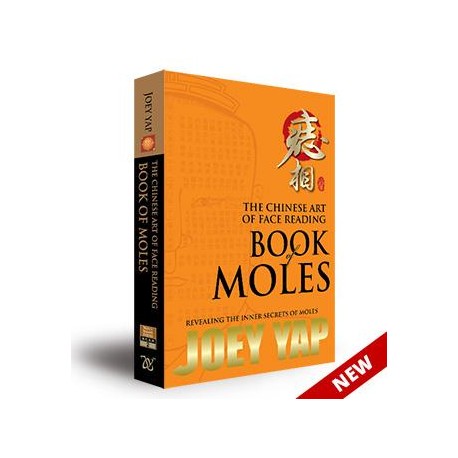 The Chinese Art of Face Reading : Book of Moles

Revealing the inner secrets of moles

The Book of Moles by Joey Yap delves into the inner meanings of moles and what they reveal about the personality and destiny of an individual. Complemented by fascinating illustrations and Joey Yap’s easy-to-understand commentaries and guides, this book takes a deeper focus into a Face Reading subject, which can be used for everyday decisions – from personal relationships to professional dealings and many others.

Chapter Highlights
Introduction : The Study of Moles in Face Reading
Learn the characteristics of moles and their implications to one’s life

Chapter 1 : Moles on the Twelve Palaces
Focus on how moles can affect one’s specific life aspects, such as career, relationship, wealth and others

Chapter 2 : Moles on the Thirteen Meridian Paths
Gain more insights to one’s general endeavours and prospects from the presence of moles

Chapter 3 : Moles on the Head
Comprehend the implications of moles on one’s head, which holds a great deal of information pertaining to one’s ultimate potential

Chapter 4 : Moles on the Body
Discover how moles on the body affect the inner being of individuals

Chapter 5 : Moles on the Limbs
Learn how moles on the limbs can exert further implications to one’s life prospects