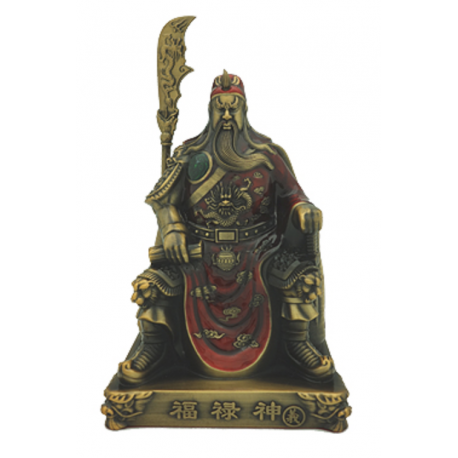 As God of War, he stands against evil and is the ultimate symbol for justice, honesty and integrity. As a martial figure, he is shown wearing clothing with a dragon emblazoned on his stomach. His fierce counternance brings with him powerful energy. Seated on a mountain's boulder, he is portrayed with good-sized moustache and beard, and fierce slant eyes is a sign of his bravery. His majestic exuberance in this special stance exerts his benevolence to protect the family from all evil spirits. Regarded as the God of Wealth, he is, amongst many other titles, the protector of the financially oppressed and protector of businessmen. His robe in red is the symbolic color of joy, and is thus used in connection with festive celebrations and special occasions. Red is believed to have magical powers against evil, being the color that is most represented the principle of yang and the element of fire. One of the most important ingredients used in magical potions is being red cinnabar. When in red robe, Kwan Kung becomes an effective cure for anyone who is a victim of anger, court cases or embroiled in conflicts with family members, colleagues and superiors. Some of the benefits of having the Kwan Kung in the house include peace and harmony for the residents, awesome protection for the patriarch and prosperity luck for all. Kwan Kung protects the innocent and defends the righteous. Place his statue in the living rooms of the home facing outwards watching your main doors as a symbol of protection against evil, robbers and harmful people. In business, Kwan Kung protects the entity from fraud and embezzlement, promotes loyalty and ensures smooth sailing. In businesses, this representation of Kwan Kung is placed in the reception area facing the outwards. It is believed that leaders and businessmen who place Kwan Kung behind them at work will never lack for powerful support from important people. This is believed to help business prosper even against overwhelming odds. Kwan Kung is even placed in the staff area to promote unity, loyalty and honesty of the employees.