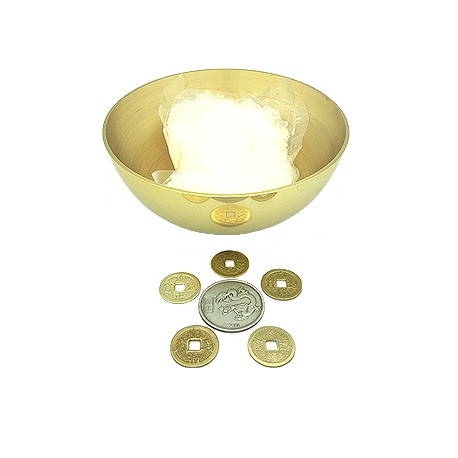 To read a more complete article about the Salt Water Cure, please click here.
This traditional Salt Water Cure uses the power from an extraordinary bowl made from seven metals. The bowl consists of gold, silver, iron, copper, tin, zinc and lead, with each of them representing the sun, moon and other planets of our galaxy. When one hits this bowl with a wooden mallet, it can actually produce melodies to bring in energies from the seven planets. Old school feng shui practitioners and Xuan Kong Flying Stars experts normally prescribe the salt water cure as an important countermeasure for three major flying star problems in either the natal chart, annual chart or monthly chart. It is said to be effective and quick in resolving flying star problems. It is an antidote for:
1. Fatal Star #5 Yellow
2. Illness Star #2 Black
3. Quarrelsome Star #3

The other potent ingredients included are a Silver Bagua Dragon Coin, 5 Emperor Coins, natural rock sea-salt. The Silver Dragon Coin with a bagua behind it is an effective secret antidote that empowers the cure further. The bottom of the bowl is first filled with a layer of thick salt and laid with the coins with "yang" side facing upwards. The emperor coins' "yang" side is where the 4 chinese characters appear. The dragon coin's "yang" side is where the dragon image appears. The bowl will have to be filled with three quarter water and safely placed on a table or on the floor undisturbed. If it has successfully subdued the evil stars, the coins will be corroded followed by a lot of salt activities taking place. If the #5 Yellow is totally destroyed, the color of the water will turn yellow at the end of the year.
One can display the Salt Water Cure on a table, hidden in cupboards or on floor level at the following locations:
1. In sectors and rooms where annual Fatal #5 Yellow, Illness #2 Black and Quarrelsome #3 stars are.
2. In the vicinity of doors where the Fatal #5 Yellow, Illness #2 Black and Quarrelsome #3 Stars are. The best is to have it hidden just behind the door when the door is fully opened.
3. By the bedside for those whose home's axis or maindoor are afflicted by any of the Fatal #5 Yellow, Illness #2 Black and Quarrelsome #3.
4. By the bedside of those whose zodiac is afflicted with Fatal #5 Yellow, Illness #2 Black and Quarrelsome #3.
SL17032